Don Bosco Youth Center - Tondo provides skills training for out-of-school youth to give them a chance to improve their lives. The students, some of whom are Jollibee Group Foundation scholars, come from 17 of Manila’s poorest barangays. ​

The center may have closed because of the ECQ but it hasn’t stopped serving families in the community. Along with student volunteers, they have been tirelessly bringing much-needed food packs from donors like Jollibee Group down to extremely poor families, many of whom derive income from informal work.​

Though difficult, there is something about distributing packs from house to house that gives them joy, said Diana Pangadlo of Don Bosco Tondo. “Sobra silang magpasalamat, kaya pasalamat din kami sa mga donors at may naihahatid kaming tulong.” 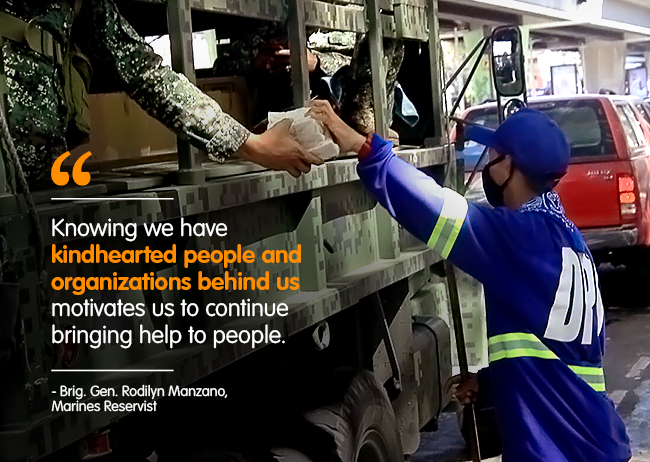 
A Marines reservist for 20 years, Brig. Gen. Rodylyn Manzano takes the force’s “first to fight” motto to heart even in disaster response. When the need to mobilize frontliner support came up, she was also first in line.​

Her “new normal” day involves distributing relief goods, hygiene kits and PPEs to hospitals and communities, and looking for other ways to support frontliners. Since the ECQ, she has also tirelessly linked JGF with beneficiaries, making sure that food packs get to frontliners in hospitals and checkpoints.​

Brig. Gen. Rodylyn calls it “love for country.” While donors are willing to give, she will always be willing to be their bridge.​ 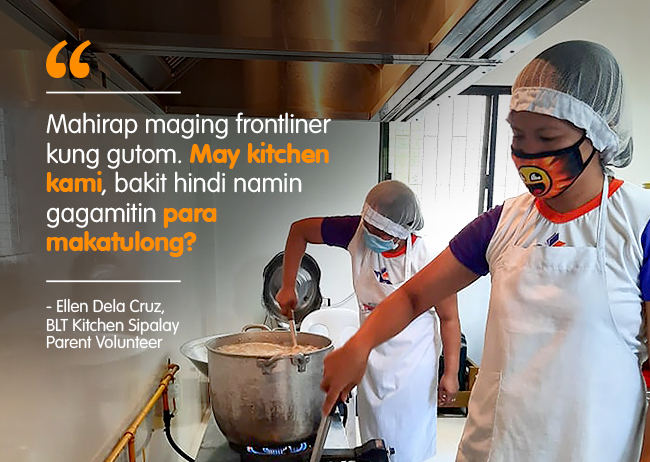 
Every day at 4 a.m., volunteer parents and teachers converge at the Busog, Lusog, Talino (BLT) Kitchen in Agripino Alvarez Elementary School, Sipalay City, Negros Occidental. They clock out at 5 or 6 p.m., after serving hundreds of breakfast, lunch and dinner packs.​

Other volunteers have also come forward to pack and transport food. Asked what keeps them going, Ellen says it’s the pride that their own children feel, and the shared desire to see this crisis through.​ 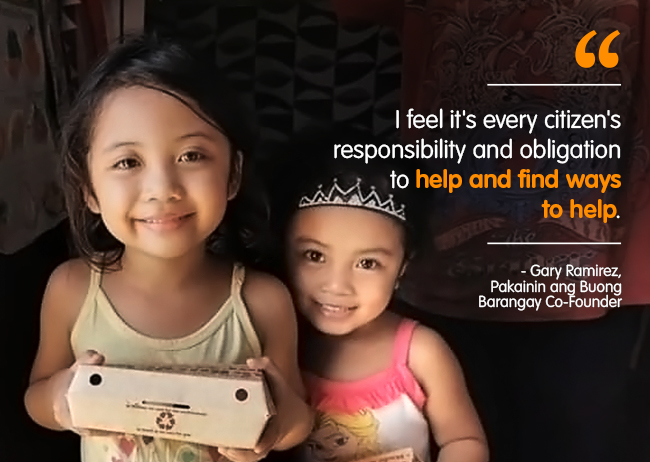 
Pakainin ang Buong Barangay (PABB) started inside Gary Ramirez’ home. With the help of a friend and their families, PABB has literally been feeding entire barangays since ECQ started.

“It’s every citizen’s obligation to find ways to help others in times of crisis,” said Gary. For PABB and the people behind it, helping meant bringing food donors and beneficiaries together, in collaboration with LGUs.

This is how thousands of Chickenjoy, Burgersteak, and Yumburger meals have found their way to households in in Metro Manila, and even in neighboring provinces like Laguna and Bulacan. Asked what keeps them going, Gary Ramirez, co-founder of Pakainin ang Buong Barangay, says it’s the smile of the children. “For some of them, it’s their first Chickenjoy.” 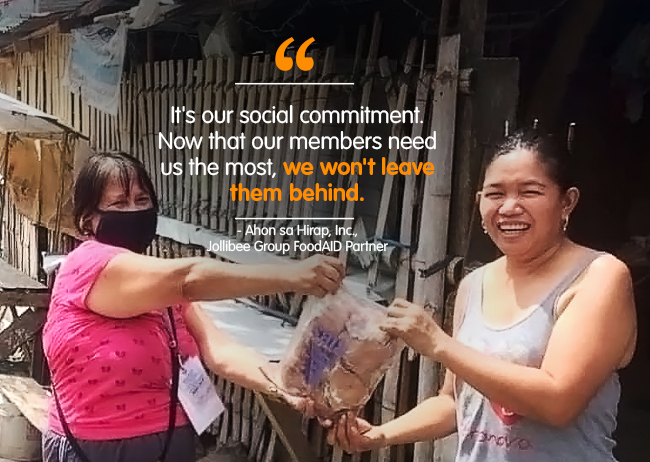 
Through micro-loans, Ahon sa Hirap, Inc. (ASHI) empowers nanays to become financially independent. “Seventy percent of our 85,000 members own sari-sari stores and other informal businesses,” said ASHI President Mercedes Abad. With their livelihood wiped out by the pandemic, members have had to depend on ASHI to keep their households afloat.​

“It’s our social commitment. Now that our members need us the most, we won’t leave them behind,” Mercedes said.​ 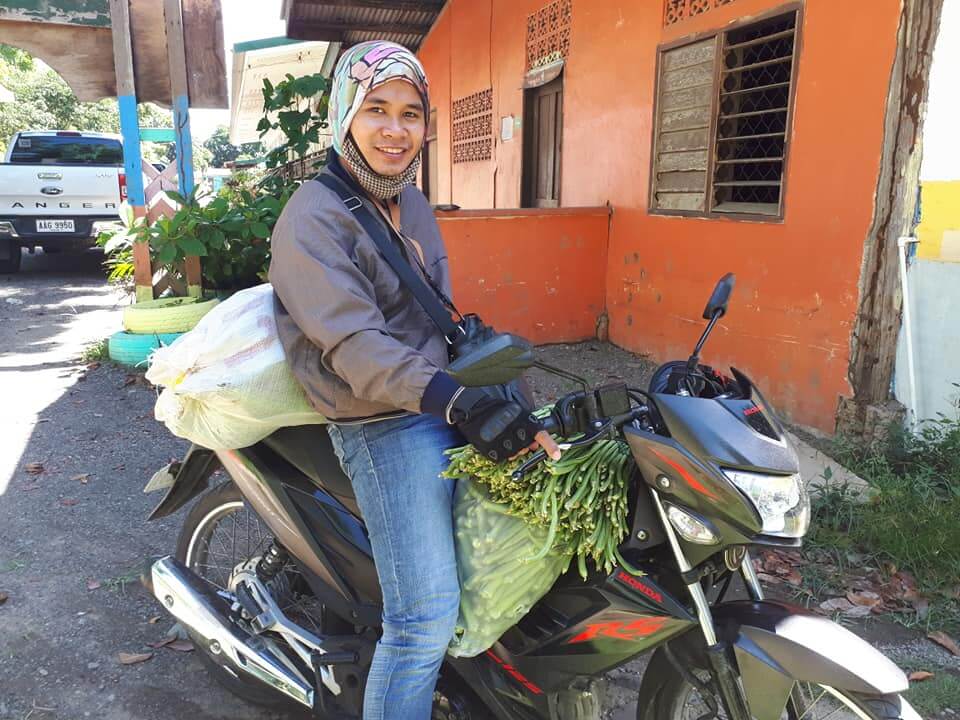 Dana Foundation: From Farmers to Frontliners

With donations, ingredients are bought from Jollibee Group Foundation's Farmer Entrepreneurship Program (FEP) farmers who lost their income when restaurants closed. Parents cook the meals in a Busog, Lusog, Talino (BLT) Kitchen at Cambanogoy Elementary School. The LGU’s staff then take the meals to the frontliners.

It's a chain reaction of kindness and generosity. “We are all affected, but we must all help when there’s an opportunity to do so,” says Dana Foundation Executive Director Nelben Moreno. 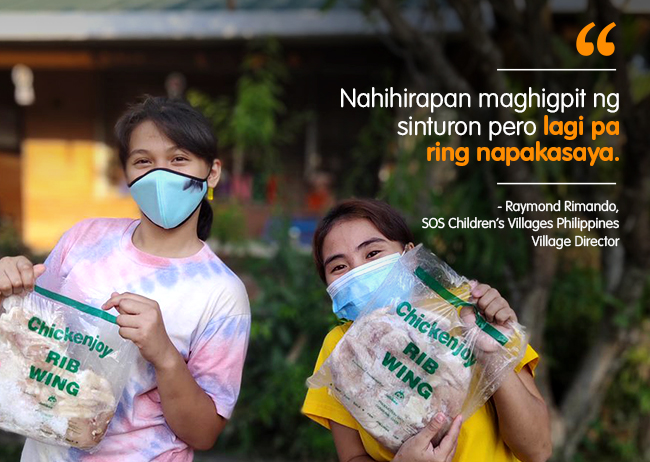 
SOS Children's Villages Philippines operates eight villages consisting of houses for abandoned and orphaned children. Each house is set up like a family, with six to eight children enjoying the love, care and guidance of a nanay.

Like typical households, SOS houses have also been greatly affected by the pandemic. Donors are more prudent and want to revisit priorities, shared Raymond Rimando, Director of the Manila Village.

For Raymond, this resilience reassures that SOS will endure. 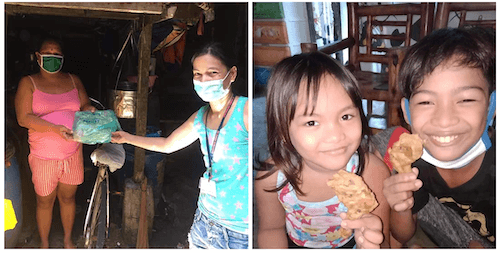 
By organizing the 4Ps beneficiaries nationwide, Samahan ng Nagkakaisang Pamilya ng Pantawid (SNPP) provides a voice to the poorest of the poor. At the pandemic’s onset, SNPP had to respond to the urgent need of their most vulnerable members: “‘Yung mga walang-wala dahil isang kahig, isang tuka,” says president Jai Catacio. With the officers’ pooled money, they bought two packs of noodles and a can of sardines per family. 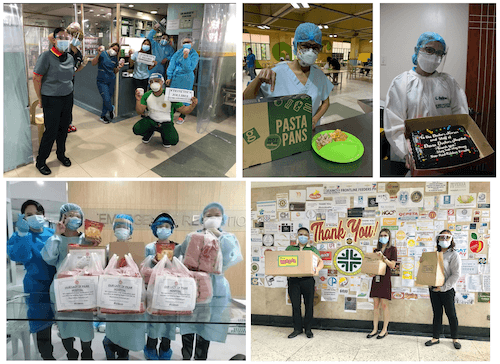 
The Jollibee Group continues to support frontline health workers responding to the COVID-19 pandemic by donating meals from its brands to about 300 hospitals around the country in August 2020. Health care workers have received food packs from Jollibee, Greenwich, Chowking, Red Ribbon, and Mang Inasal.

“The Jollibee Group recognizes that our medical frontliners have made tremendous sacrifice in the past months. The fight against the COVID-19 pandemic gets tougher as days go by. Providing them meals to enjoy is a way to refresh their tired bodies and refuel their heroic efforts. We are more than grateful for what they are doing for our countrymen,” said Jollibee Group Foundation Executive Director Gisela Tiongson.

Sagay City: Leaving No One Behind


Since March, the city government of Sagay, Negros Occidental has been hard at work not only in keeping its citizens safe and its frontliners well-nourished—it also continues to care for the members of its community, most especially persons under monitoring for COVID-19, children, and pregnant and lactating mothers. Support from the Jollibee Group FoodAID as made its community feeding programs even more sustainable.

Donations of siomai, marinated pork, and bangus sisig are complimented with soup, vegetables like malunggay, pechay, cabbage or carrots, and fresh milk. In a day, more than 1,700 meals are cooked and distributed across its 25 barangays, come rain or shine. ​

"We are inspired that Jollibee Foods Corporation and Jollibee Group Foundation remain a steadfast partner of Sagay City in our social services endeavor. For all your support, madamo guid nga salamat," said Mayor Alfredo Maranon III.​ 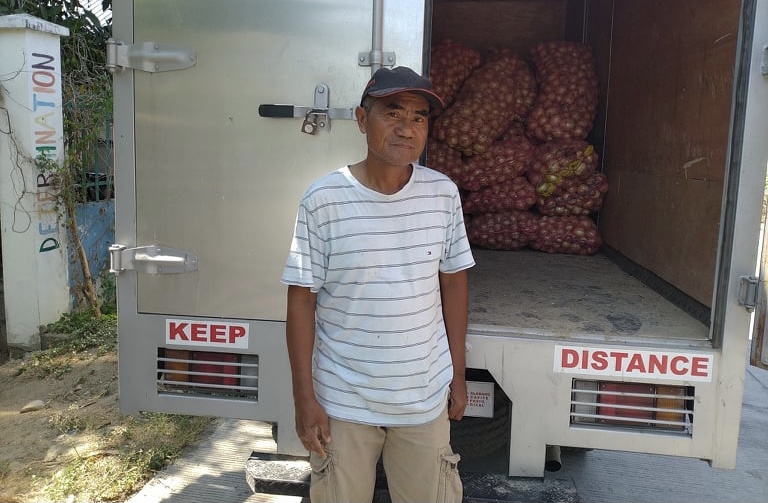 
Farmers like Gregorio Quintela have had to cope with limited access to input supplies and buyers for their produce during the height of COVID-19 pandemic. Despite the challenges, he continued to tend his farm and deliver vegetables to local markets like Pangasinan Agri-Pinoy Trading Center and an institutional buyer, Jollibee Group.

Jollibee Group continues to purchase vegetables from smallholder farmers and with the Farmer Entrepreneurship Program (FEP), helps farmer groups adapt to the current situation through capacity-building.

Learn about the experience of Gregorio and the Alcala Onion Growers Multi-Purpose Cooperative here. 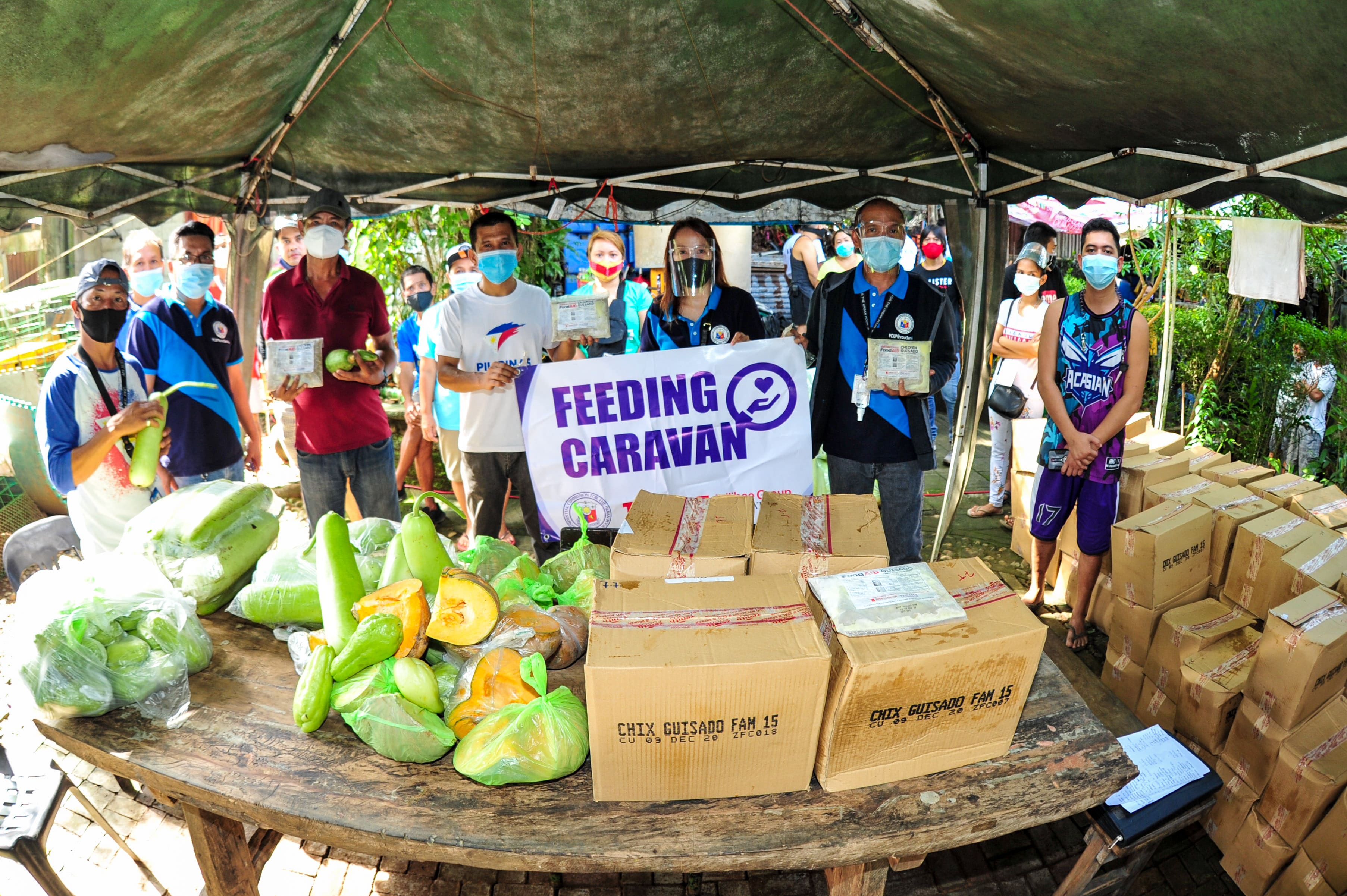 
The Presidential Commission for the Urban Poor (PCUP) has been assisting many communities during the pandemic, many of whom are informal workers who lost their source of income. Jollibee Group Foundation and Singapore-based Temasek Foundation have teamed up with organizations such as PCUP to bring sautéed chicken packs to vulnerable families, as a first step to help them get back on their feet soon.

“Every time we distribute (food), I feel happy because we become instruments in providing this basic need,” said Merlyn Lopez-Sunga, Development Management Officer II, PCUP Field Operations Division-NCR. “I learned that most of the families have not received any food relief yet. As soon as the truck with our food packs opened, I saw their faces lit up with excitement. They were very grateful and even sent us photos of how they cooked it with the vegetables.” 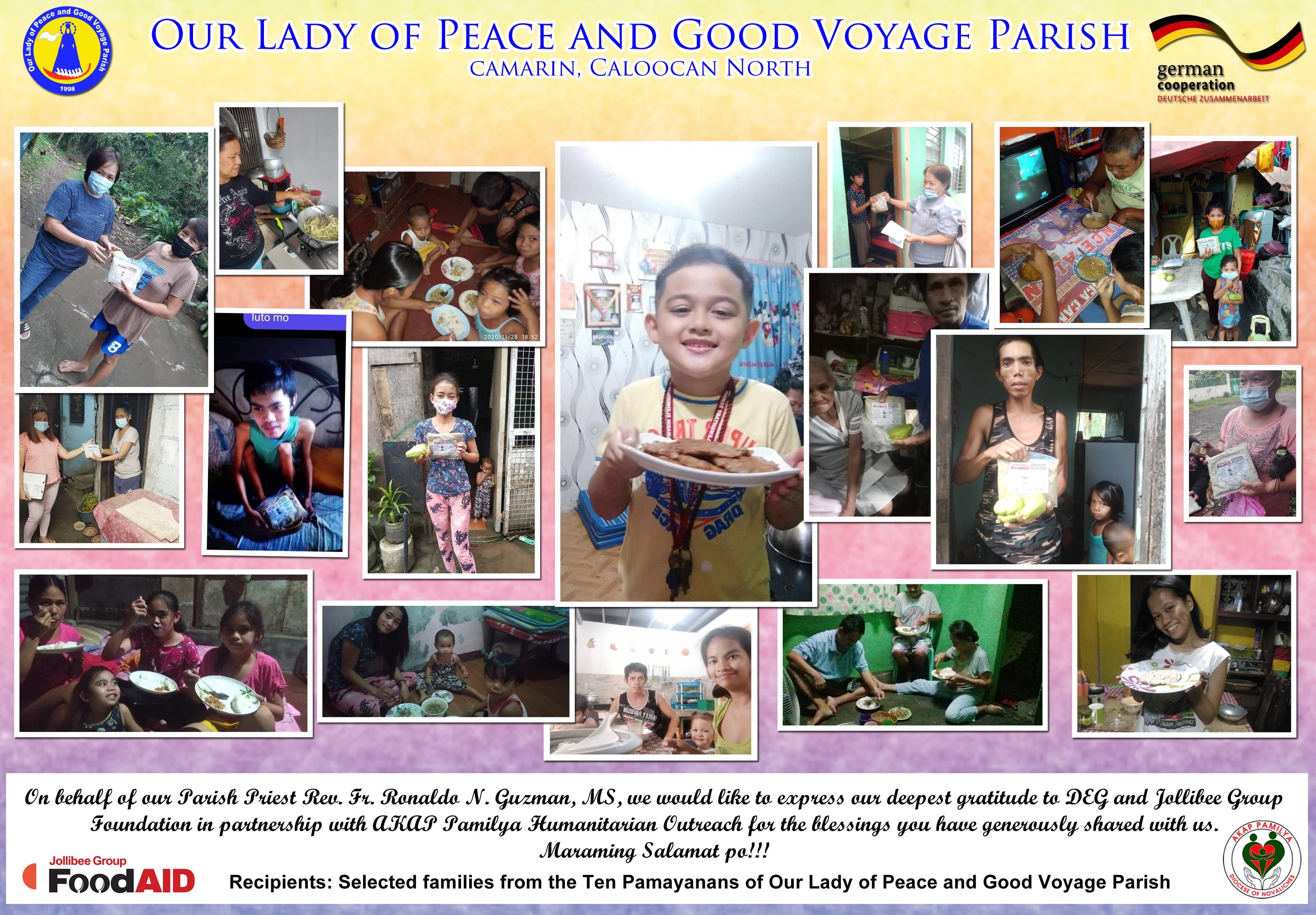 
Abot Kamay Alang-alang sa Pagbabago (AKAP) Pamilya is an institutional and community-based support program in the Diocese of Novaliches for orphan families. Since the pandemic, volunteer lay coordinator Milet Mendoza (an independent humanitarian and social development worker) says AKAP Pamilya has had to expand its outreach to other urban poor communities severely affected by the COVID19 lockdown. With the help of at least 20 parishes, it ensures food provision to more vulnerable sectors. ​
​
The partnership with AKAP Pamilya has been more active not only because of its efficiency in distributing relief, but also because of the unwavering dedication of volunteers despite the risks to themselves. Strict protocols are strictly adhered to in the conduct of humanitarian outreach. Jollibee Group Foundation has partnered with AKAP Pamilya since the onset of the pandemic in March. Recently, they have received more than 7,000 Chicken Guisado food packs from the German Federal Ministry for Economic Cooperation and Development (BMZ) through the DEG (German Investment Corporation). ​
​
“Salamat sa (thank you) JGF and DEG support. We keep the faith that we will come out of this sad situation with a stronger spirit knowing that we are not alone,” said Milet.​ 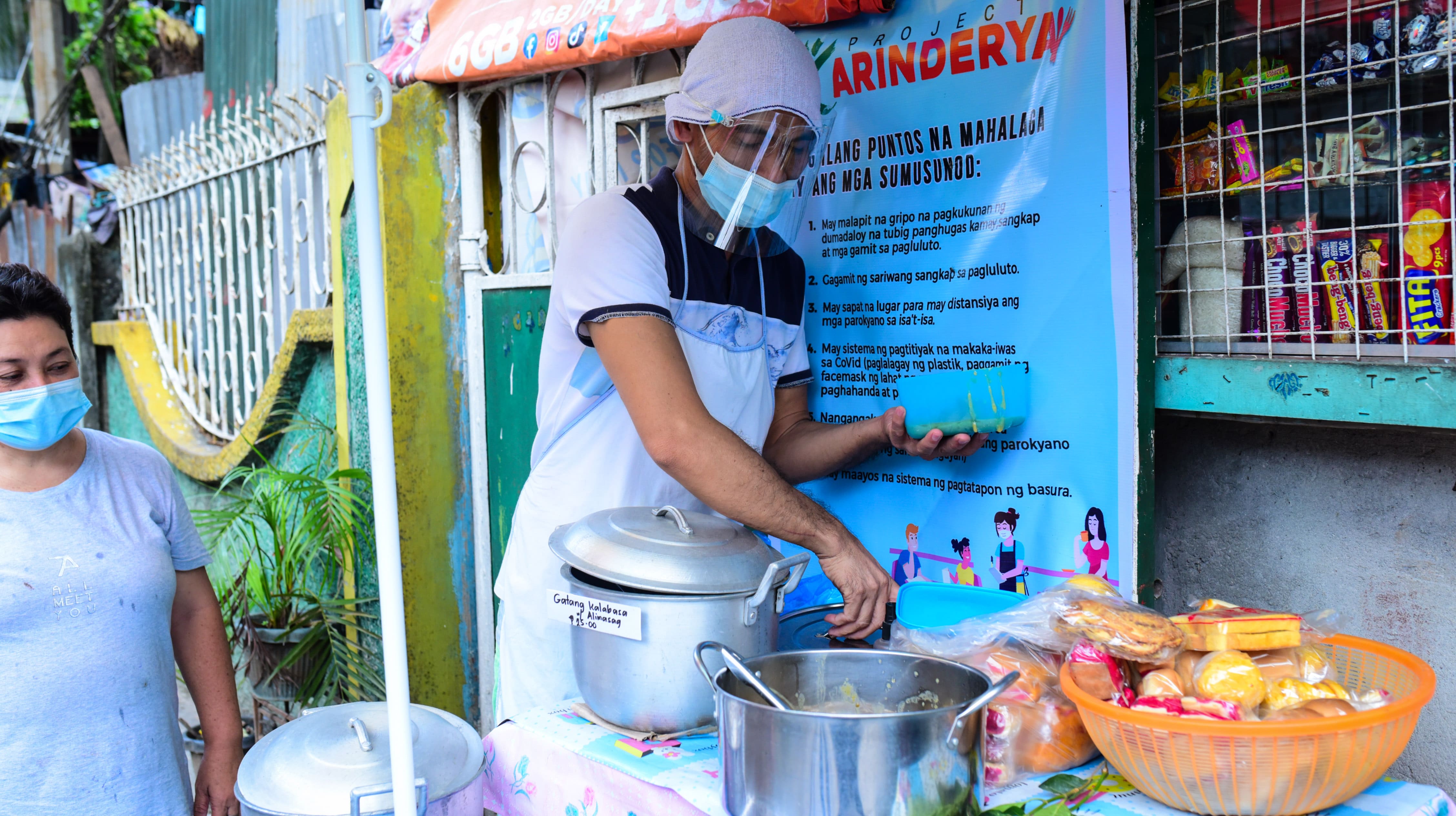 
Jessie Seno, a karinderya owner in Quezon City, is one of the micro-entrepreneurs who was able to revive his livelihood through Project Karinderya. Learn more about his experience in the project through this video.

Project Karinderya was organized to help provide access to safe food to affected communities and sustain livelihood of small entrepreneurs most affected by COVID-19. Civil society and private sector organizations banded together to make food immediately available to an increasing number of families who suffer hunger due to the effects of the lockdown, while helping food micro-enterprises or karinderyas to survive and recover their source of income. 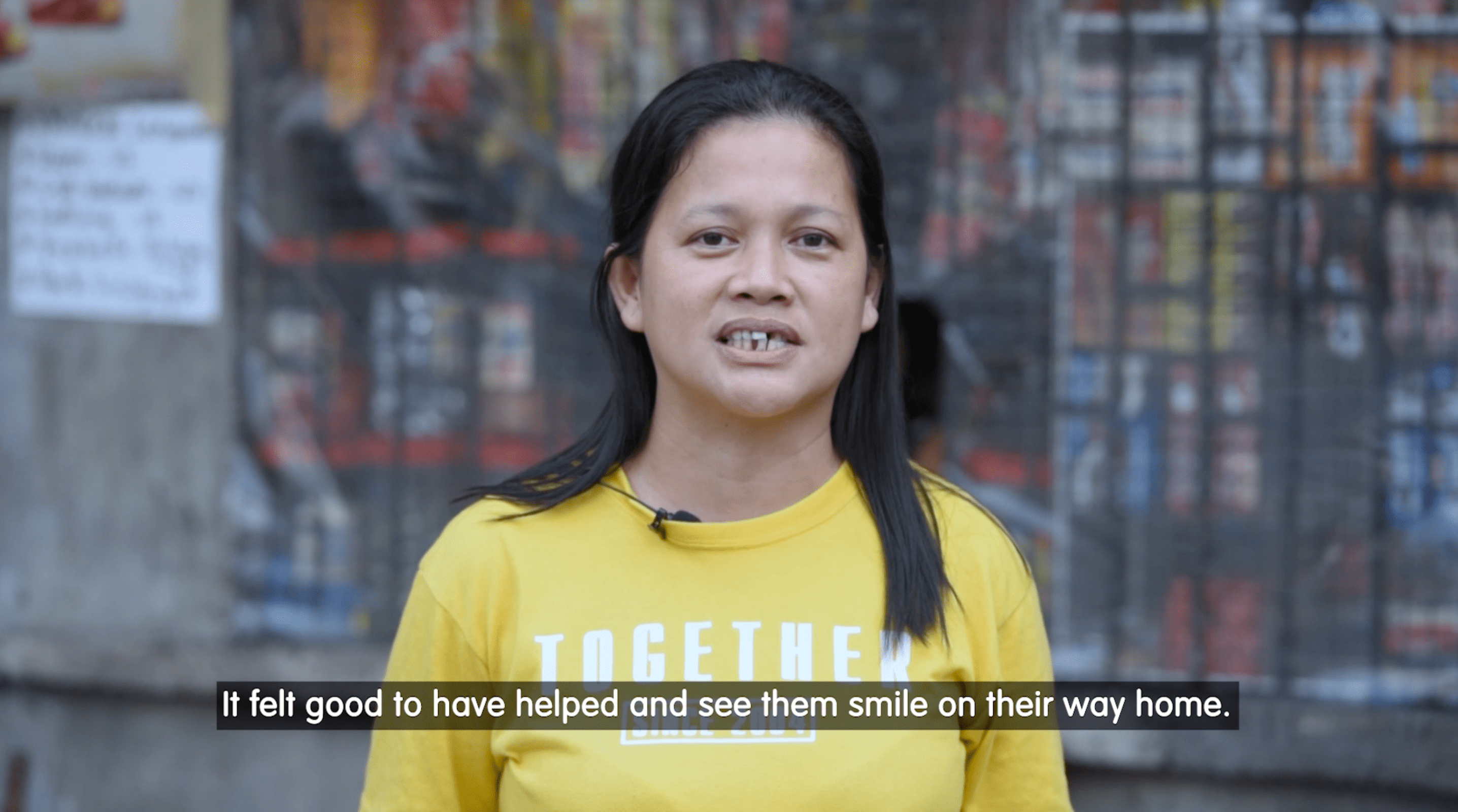 Back in Business: A Karinderya Owner's Success Story


When the pandemic happened, karinderya owner Myrna Taran of Caloocan City became the main provider for her family as her husband lost his job. Together, they persevered in selling food, but less customers are willing to buy. “Marami rin pong nawalan ng trabaho kaya hirap silang makabili (Many also lost their jobs, so they find it hard to buy),” Myrna said.

Myrna became part of the Project Karinderya initiated by Kabuhayan sa Ganap na Kasarinlan Credit and Savings Cooperative and KASAGANA-KA Development Center, Inc. and supported by Jollibee Group Foundation. “Binigyan kami ng pagkakataon dito (This project was an opportunity for us),” she shared. In this video, find out how her business became more stable, and what being part of the project and serving others mean to her.